This part is made from resin and is supplied unpainted and unassembled, color may vary from the picture.

Games Workshop Tau Crisis Suit is not included and is only shown to illustrate the scale & size of the part.This item is not a toy and is not intended for children under the age of 12.

Excessive heat may damage resin products. Do not leave resin parts in hot areas (such as a car) or in direct sunlight as it may damage the model or cause the parts to warp. Warped resin items can usually be straightened by soaking the part in a cup of hot water (not boiling) until it becomes soft, then carefull bending the part back into proper shape then allowed to cool.

How to convert missile launcher arms:

Fill in the rear part of the missile launcher with greenstuff (left), let the greenstuff completely cure and harden 4+ hours. Once it's cured carefully trim off the extra until it's flush with the resin. You'll want to make sure you use a fresh blade for this as a dull blade won't give a nice smooth surface. You can also file the greenstuff smooth once the bulk of it has been removed. Once it's done it'll look like the version on the right. Alternately you could use a thin piece of sheet styrene to cover the exhaust holes if you don't like working with greenstuff. 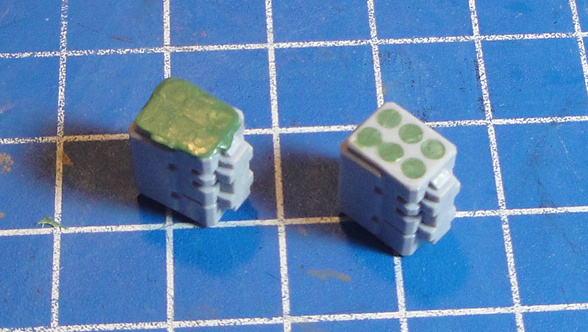 Once the missiles are done you'll want to make some cuts to the arms. There's a box-like indentation on the arm that I used as a guideline for where to cut. Use a jewelry saw or razor saw to make a nice even cut. Then file or sand the ends to make sure it's both flat and level. 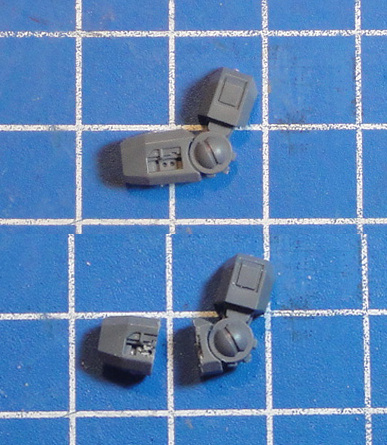 Once you've cut and cleaned up both arms you're ready to glue on the Two Row missile launcher. If they are centered and even it'll cover up most of the greenstuff plugged holes on the rear. You can use the hole pattern to help you eye ball that you have everything lined up the same on each arm. 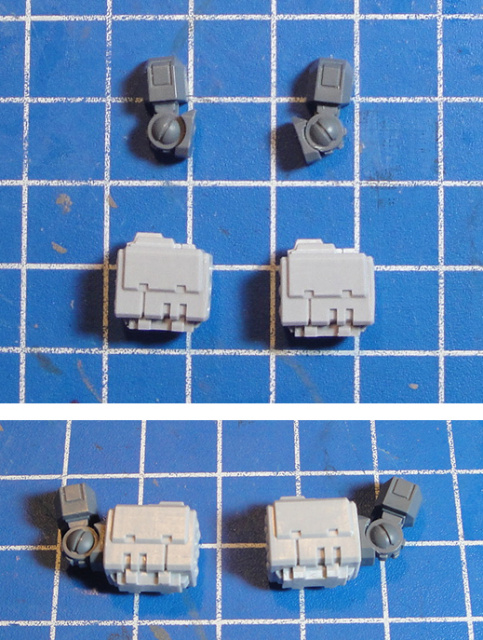 Add the arms to your model and add feel free to add some railguns for that old-school over the shoulder look.