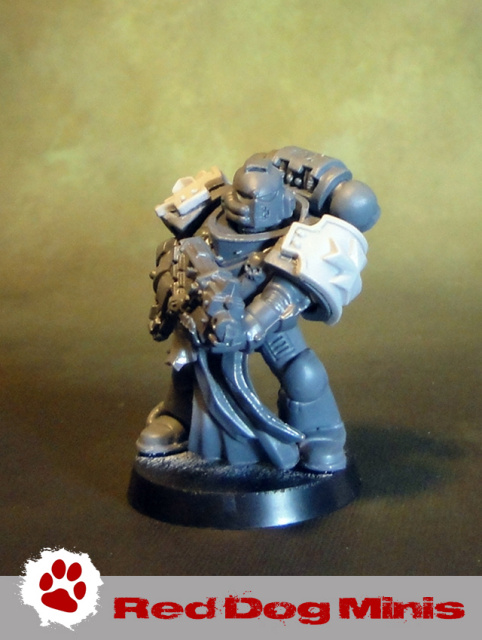 These parts are made from resin and are supplied unpainted and unassembled, color may vary from the picture.

Games Workshop Space Marine is not included and is only shown to illustrate the scale & size of the part.This item is not a toy and is not intended for children under the age of 12.

Excessive heat may damage resin products. Do not leave resin parts in hot areas (such as a car) or in direct sunlight as it may damage the model or cause the parts to warp. Warped resin items can usually be straightened by soaking the part in a cup of hot water (not boiling) until it becomes soft, then carefully bending the part back into proper shape then allowed to cool.

The pads are cast as straight pieces and can be heated and bent around curved items. To do this I first microwave some water in a coffee mug so that it's hot enough for making tea or coffe (but not actively boiling) take care not to burn yourself with the water as it will be very hot and giving off steam which can scald your finger tips if you aren't careful. To avoid this I place the pad inside the bristles of an old toothbrush which holds it without it needing to be squeezed with tweezers. Soak them in the hot water until they become pliable (1-2 minutes) and then I carefully bend them around the handle for my Exacto hobby knife, which matches the bottom curve of a marine shoulder pad pretty closely.

I carefully line it up along the bottom edge of the pad and super glue it along the bottom edge and in the center of the pad leaving the top portion and sides loose, then I re-soak it in hot water a second time so that the top section can then be shaped. Super glue isn't impacted by water and can be worked with while underwater so it won't matter if the parts are still dripping wet. (a hobby tip I picked up from working with fishtank coral)
Because if the thickest part of the pad and located dead center the cross can be a bit stubborn if it's not heated enough, it takes a little practice but if you mess up it can be straightened by reheating it and it''ll return to the original shape. If it's too cool it'll resist being reshaped and could crack if forced so it's just a matter of making sure it's nice and hot before bending/straightening. (Try not to use any hard edges like tweezers to handle the resin while it's soft or you can end up leaving tool marks on it). The bottom edge will be flush with the pad and circular in shape, the upper portion has a slightly rounded V shape and there's a small gap between the top edge of the pad and the center of the underlying pad which I leave that way since it creates a sense that the heavy pad is fitted over the shoulder pad, it can also be filled in with greenstuff if people want it to look fused together with the under pad.
Powered by instantecom.net website creator